skip to main | skip to sidebar

LIVE FROM THE FLOOR OF THE AMA HOUSE OF DELEGATES MEETING:
On the first full day of the AMA Interim Meeting our Florida delegation under the leadership of Drs. Troy Tippett and Coy Irvin met for four hours to discuss resolutions and to plan our strategy for the AMA meeting.
We have submitted nine resolutions including Recover Audit Contract Appeals, Payer Measures for Private and Public Health Measures, Counterfeit Drug Prevention, Arbitrary and Abusive Economic Profiling, Insurance Reimbursements, Repeal of Sustainable Growth Rate in Medicare Payments to Physicians, Educate the Public on Potential Lack of Access to Healthcare for Medicare Recipients.
In his remarks our AMA President William G. Plested,MD addressed the looming Medicare reimbursement crisis with an anticipated cut of the 2007 rates by 6%-20%!!!
He emphatically called upon physicians to act NOW and not to be content with halfhearted solutions. He criticized Pay-for-Performance Measures as attempts solely focused to curb medical expenditures and NOT as an attempt to improve the quality of medical care.
He called upon physicians to adhere to an uncompromising commitment to the principles of medicine, to curb and reject any attempts to further encroach on the practice of medicine and to resist any interference with the physicians-patient relationship. 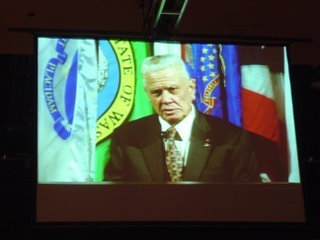 His address was followed by remarks of the Secretary of Health and Human Services, Mike Leavitt, who cautioned us that healthcare expenditures continue to rise exponentially soon to reach 25% of the GDP. Furthermore, he expressed his concern that we do not have an interconnected healthcare system enabling us to seamlessly exchange information to improve and maximize quality care and to safeguard patient safety.
He urged physicians to embrace medical information technology and to integrate certified EHR solutions.
In his opinion we have to move from a volume-based reimbursement system to an algorithm of quality-based payment modality and calls upon physician to embrace this concept and the voluntary quality reporting system.
In a Q&A session he answered several questions submitted in writing by the HOD delegates focusing on the unfair reimbursement practices that will jeopardize the viability of our medical practices.
In my opinion, Secretary Leavitt does not seem to understand the potential impact of the Medicare cuts and tries to couple increased payments with demonstrated quality of care. He ignores that Baby-Boomers are eligible for Medicare resulting in an increased volume of Medicare services.
Unfortunately, the SGR is still focused on a volume-based reimbursement formula, which is penalizing physicians for seeing more Medicare patients.
The solution may be to freeze Medicare services rendered thereby diminishing access to care for Medicare recipients.
Our AMA has decided to FIGHT BACK.
I urge you to order the "Medicare Physician Payment Action Kit" . You can obtain more information regarding Medicare cuts and suggestions how to address this crisis by visiting our website at http://www.ama-assn.org/ama/pub/category/13409.html . 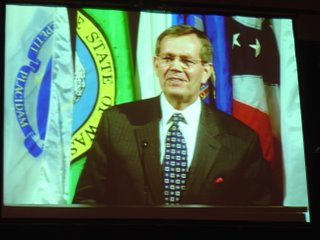 Posted by Bernd Wollschlaeger,MD,FAAFP,FASAM at 7:26 PM No comments:

Dear Friends and Colleagues:
Attached you find an interesting article from todays Miami Herald emphasizing election issues that got buried in the election hysteria.
Foreign policy and National Security issues are being stressed as the crucial topics in the campaign. What has been forgotten by most candidates , including both Gubernatorial candidates, that small businesses are facing double-digit increases in healthcare expenditures. Employers can simply not afford offering affordable health insurance. They can drop health insurance, offer health insurance for a few employees and let go of the others, or try providing barebone health insurance with significant out-of pocket expenditures for all.
These issues need to be addressed at once to maintain the viability of small businesses and to guarantee jobs for Americans that actually offer meaningful health insurance coverage.
Unfortunately, short-term solutions seem to make the headlines such as the decision by Baptist health systems in Miami to prefer business vendors that offer health insurance to their employees. That maybe a nice PR stunt, but its not a solution.
Baptist hospital decision may very well push small companies out of the market, which just cannot compete under those conditions leaving big corporations in the game. We should assist instead of punishing small employers.
What we need are: national insurance purchasing pools, risk diversification to minimize the impact of catastrophic medical bills on small companies, individualized insurance packages not limited by state insurance mandates, and not-for profit state or national prescription purchasing plans that can negotiate the most competitive prices with drug manufactures.
It requires a sustained bipartisan effort to fix our healthcare system now to save small businesses from certain demise.

Some of the most frustrating problems facing small business owners -- the ever-rising cost of health coverage, expanding government regulations and uncertainty about taxes -- are again concerns as the midterm elections approach. Owners have hopes for change on some of these issues, but they realize that others are likely to remain unresolved, no matter who wins in November.

Many small business owners say healthcare costs is one of their biggest problems -- they want to offer insurance to attract the best workers, but it's becoming more and more expensive.

Businesses have been looking to the federal government for help, but a possible solution known as association health plans, which would allow small businesses to band together across state lines to buy insurance in groups, has continually stalled in Congress. In the meantime, the cost of insurance coverage is soaring.

''It's gone up pretty much by double digits every year and they're finding it harder and harder to get,'' Dan Danner, executive vice president for public policy with the National Federation of Independent Business, said of small business owners and insurance. ``They don't feel like they have many choices in the marketplace.''

Brian Drum, CEO of Drum Associates, a New York-based executive recruiter, voiced the frustration about healthcare costs felt by many small business owners: ``It seems like it's out of sync with other things that are inflating.''

Danner, whose advocacy group is based in Washington, D.C., said the federal estate tax laws remain an issue with business owners, many of whom want their families to be able to continue owning and running the company after they die.

The laws currently exempt the first $2 million of an estate, and the top rate is 46 percent; those numbers will continue to decline through 2010, but then, unless Congress acts to extend the law, they will revert to older and higher rates in 2011.

If an estate including a family business is valued at above the law's threshold, an owner's heirs could be forced to sell it in order to pay the estate tax.

Danner said he believed Congress would act before then to extend those provisions, but there's no way of knowing at this point how lawmakers might change the law. And with the possibility of more Democrats in the new Congress when it convenes in January, business owners might be even more uneasy; it is the Republican party that has backed reductions in the estate tax.

''They would like A, for it to be lower and B, to have some certainty,'' Danner said of business owners and the tax. ``They're trying to plan for the future.''

Similarly, small business owners want to know what's ahead for what's called the Section 179 tax deduction, said Cheryl Womack, chairwoman of Leading Women Entrepreneurs of the World, an association of businesswomen based in Kansas City, Mo.

The deduction, named for a provision of the Internal Revenue Code, allows small businesses to deduct upfront rather than depreciate the costs of certain equipment. For the 2006 tax year, the deduction is $108,000.

A nebulous and multipronged issue has to do with government regulations that affect many different aspects of running a business.

Jennifer Kluge, president of the National Association for Business Resources, said the growing number of regulations administered by federal agencies is another reason why business owners are concerned about a more heavily Democratic Congress.

''It seems like when we have Democrats in office, we get a lot more regulatory issues to deal with,'' Womack said.

But regulations also come from state and local governments. And because of the multitude of rules that affect a cross-section of industries, change in the form of repealed regulations will be hard to come by.

''It's a long shot, it'll probably never happen,'' said Kluge, whose business group is based in Warren, Mich.
Posted by Bernd Wollschlaeger,MD,FAAFP,FASAM at 11:13 PM No comments:

Baptist Hospital and the Uninsured - Another Perspective

RE: Editorial, Help for uninsured

Baptists hospital’s decision to favor vendors who provide health coverage to their employees may me just one of those PR bubbles.
Facing double-digit increases in healthcare expenditures employers can simply not afford offering affordable health insurance. They can drop health insurance, offer health insurance for a few employees and let go of the others or try providing barebones health insurance with significant out-of pocket expenditures for all.
Baptist hospital decision may very well push small companies out of the market, which just cannot compete under those conditions leaving big corporations in the game.
We should assist instead of punishing small employers.
What we need are: national insurance purchasing pools, risk diversification to minimize the impact of catastrophic medical bills on small companies, individualized insurance packages not limited by state insurance mandates, and not-for profit state or national prescription purchasing plans that can negotiate the most competitive prices with drug manufactures.
The US health insurance system is broken favoring the healthy and punishing the sick.
It requires a sustained bipartisan effort to fix it now to save small businesses from certain demise.

TRAIGHT TO THE POINT
Help for uninsured
Baptist Hospital’s new policy of favoring vendors who provide health coverage to their employees is a good example of doing well by doing good. The policy will affect more than 10,000 suppliers -- and undoubtedly will make a difference.
It is based on a simple, effective idea: Encourage firms to offer vital health benefits. This is good for employees and for communities that often subsidize uninsured patients at public hospitals and clinics. Studies have shown that insured people seek more preventive care, which promotes better health and lessens the need for more-expensive, last-minute treatment.
Baptist will benefit, too, because it provides health care for many uninsured -- at a cost of more than $100 million last year. Let us hope that the trend catches on and shrinks South Florida's uninsured population.
Posted by Bernd Wollschlaeger,MD,FAAFP,FASAM at 9:27 PM No comments: